I had an e-mail this morning from a reader who said he was a big fan of my books, which was nice of course. But he also pointed out that the characters in the Death Force series used the word ‘sodding’ all the time, and it got a bit repetitive.

There is a reason, however. They are soldiers. In real life it would be fu%£kig this and f!c£king that. And for some reason, I don’t think swearing works very well in books. I don’t have anything against it in real life, and it can work fine in films, but I print it somehow falls flat.

So I use sodding instead.

But maybe that doesn’t quite work either?
Posted by mattlynn at 08:58 No comments: 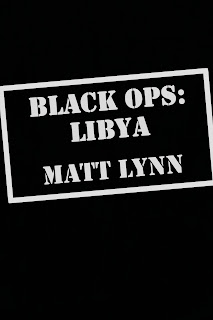 The Kindle is a huge opportunity for writers. It is not just a new way of distributing our work. It is also an opportunity to tell stories in a new way. I’m just launching a new series of e-book only novellas called Black Ops. The first one is called Black Ops: Libya, so it is fairly obvious where it is set. The idea, however, is to tell stories ripped straight from the headlines, and put them out instantaneously.

The e-book allows us to do that. Traditional publishing takes a year at least to get a book to the market. So the instant thriller, which is what the Black Ops series aims to be, takes advantage of the technology to tell a story that has the advantage of immediacy. It is real-time story-telling.

In the first one, an ex-SAS guy called Alex Marden and a former Navy Seal called Jack Rogan are dropped into Libya by NATO to retrieve a document in the hands of the old regime that would be hugely embarrassing to the British and American governments if it fell into the wrong hands.

But they soon get themselves caught up in the fighting and chaos as Tripoli falls to the rebels.

It is a cracking adventure story. And the first time anyone has taken advantage of the e-book to try something like this.

Posted by mattlynn at 03:42 No comments: